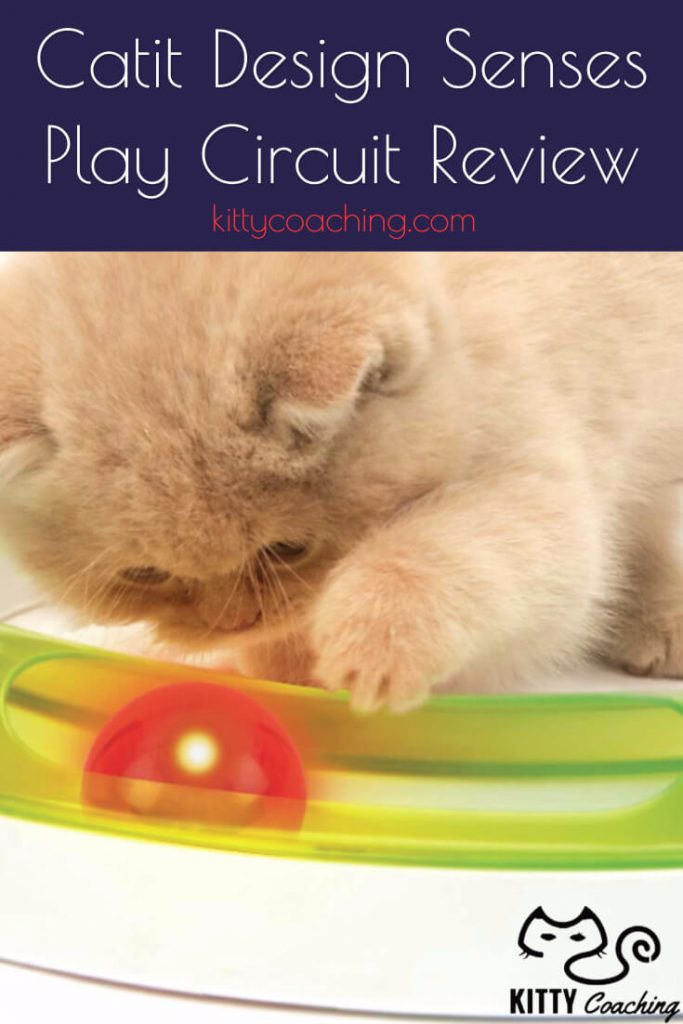 We asked our writer to try out the Catit Design Senses Play Circuit. He duly sent us his verdict, plus that of his cats!

The CatIt Senses toy arrived well packaged, and I have a feeling the cats will enjoy the box as much as the toy! (Note to anyone selling cat toys: send them in a box. That way, even if the cat refuses to play with the toy, they’ll at least make good use of the box.)

The CatIt Senses looked well made, and the main tube tunnels are are fairly neutral blue and white color – this won’t matter to your cat, but it can be reassuring to know you won’t have a glaring flourescent item spread out across your living room.  The roller ball IS flourescent (green, with a red laser light – more on this later), but still manages to be fairly subtle.

While the CatIt Senses does require a very minimal amount of assembly, this is fairly straightforward, and simply consists of snapping tubes together, and dropping the ball in – remember to pull out the plastic tab from the ball before you put it into the track.  The tubes themselves are smooth, and feel durable, with no rough edges or bad fits.  They click together much like a child’s toy might do, and don’t require any tools, or much force, meaning that even elderly cat owners without much physical strength could assemble the toy with ease.

Assembled, the CatIt Senses doesn’t take up too much space, and so could easily be kept out in the living area of a small apartment without detracting too much.  If you need to move it around, it can easily be picked up, and held in both hands, without any of the tubes breaking lose, or the ball falling out.  It’s very lightweight, too, so is no effort at all to move from place to place.

We’ve given it a slot in our 5 best electronic cat toys.

Setting the CatIt Senses going, in order to get your cat’s attention and encourage them to play with the toy, couldn’t be simpler: the plastic tubes have wide, open slots along  their tops, and you just pop a finger through, and flick the ball to set it rolling.

The laser light is very bright, and multi-directional – almost impossible for most kitties to ignore. The slots, through which the ball is batted about by the cat, are more than wide enough to accommodate most kitty paws, even when those paws are being rather enthusiastic, without any risk that the cat will snag its paw or end up unable to extricate itself.

While the ball does make a small amount of noise as it rolls through the tubes – particularly if you have a rather enthusiastic cat playing with it! – it isn’t particularly intrusive.  If you’re a light sleeper, you may want to dismantle the CatIt Senses and put it away while you’re trying to sleep. 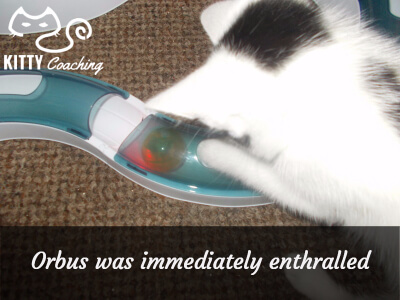 Cats in the Arena!

Orbus was immediately enthralled by the CatIt Senses, and picked up what he needed to do to set the ball rolling straight away. The CatIt Senses offered him the opportunity to jump over and around the tube set up, exploring which angles worked best in terms of ball chasing effectiveness.

He spent about ten minutes haring around the CatIt Senses, enthusiastically batting the ball, always focused on where it would be once he’d knocked it into play.  Once he finally stopped playing, he fell straight to sleep, and slept soundly for the next three hours – certainly one very happy kitten!

Limina wasn’t particularly interested, but then she is a much more human-focused cat in any case, preferring cuddles to toys.

Valkyria did explore the CatIt Senses, but seemed unimpressed, although the laser light on the ball did catch her attention.  Whereas Limina simply ignored the toy, preferring to come to me for fuss, Valkyria did pay close attention to it, walking all around it, sniffing it at intervals, and appearing to be engaged in thoughtful deliberation on whether it might, in time, be something she would deign to amuse herself with. 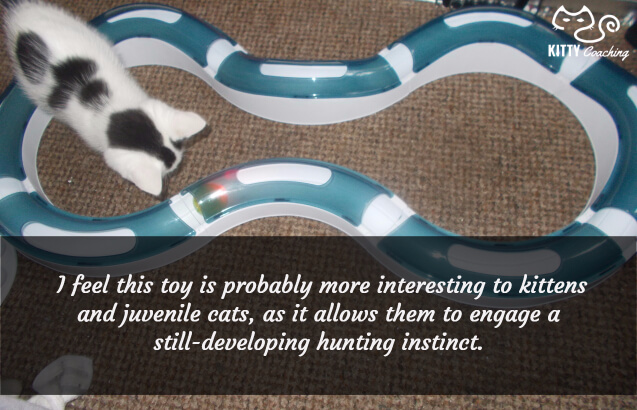 Overall, I feel this toy is probably more interesting to kittens and juvenile cats, as it allows them to engage a still-developing hunting instinct. Older cats, proficient in hunting, are disinclined to waste their energy in pretense.

If you have a kitten or young cat, the CatIt Sense could be an ideal boredom-breaker for when you have to go to work, or if you need to take care of household chores without a cat underfoot.

Oh, wow! This is amazing – I’m gonna get that ball. I’m totally gonna kill it. Wait, wait – where’d it go? Come back here!  Wow, I don’t think I’m ever gonna get tired of this! It’s like chasing mice and birds and stuff, which I can’t do right now because I’m too little to go outside, or something.

Ohmigosh! There’s a light – gotta get the light! I don’t know why humans think that doggies are cleverer than us cats – I bet a dog wouldn’t know what it had to do straight away, like I do!

Wow, this is so cool – I can actually jump over the thing, maybe… no… I thought I could maybe get the ball from the other side, but that’s closed in as – wait, there it is! I see it! Come here, you…

What? You want me to say how much I like it? In paws? Man, I love this thing!  It’s way more exciting and fun than four paws – can I add a tail on, too? So, like, four paws and a tail?

Orbus’ Verdict: Definitely, totally, more than four paws. Four paws and a tail, because it lets me hunt without going outside, which is dangerous when you’re little. And people don’t get mad when I kill the ball, like I think they would if I maybe killed a bird outside, or something.  And I can jump over it, and there’s lights – it’s everything I ever wanted!

Four paws. And a tail.

Oh.  Well, thank you for thinking of me, but I’d really like a cuddle, actually.  Is there food that I can look for? That’s fun – I like using my sense of smell, and hunting like that.  No? Oh.  You see, it’s more the boys that go for the leaping about kind of hunting. Us ladies use our noses, and then quietly ambush things.  I don’t think you can quietly ambush a ball, really.

It’s nice that it doesn’t make noise, and it doesn’t get in my way – I can walk round it to get to you for cuddles easily, and that’s important.

Ummm… I mean, there’s nothing wrong with it.  And I might play with it, if Valkyria has one of her moods, and doesn’t want to talk to me – she does that, sometimes. It makes me sad. And at least it doesn’t make noise.

I don’t want you to feel bad… so, maybe two paws? Because it’s not noisy, which is good, and I might play with it, one day.

What are you cluttering the place up with now, human? Hmm… let’s have a look – oh, for goodness’ sake! You expect me to run around, burining up energy I could be using to keep warm, in winter, chasing a ball? That doesn’t even do anything? Oh, wait – it has a flashing red light. Wonderful.  Hmm… I suppose it could be fun to racket around with this while you and the other human are trying to sleep.  Yes, that thought amuses me – that gets one paw from me.

Valkyria’s Verdict: One paw, human – purely because of the potential for nocturnal harassment.