10 Cheap Toys Your Cat Will Actually Play With 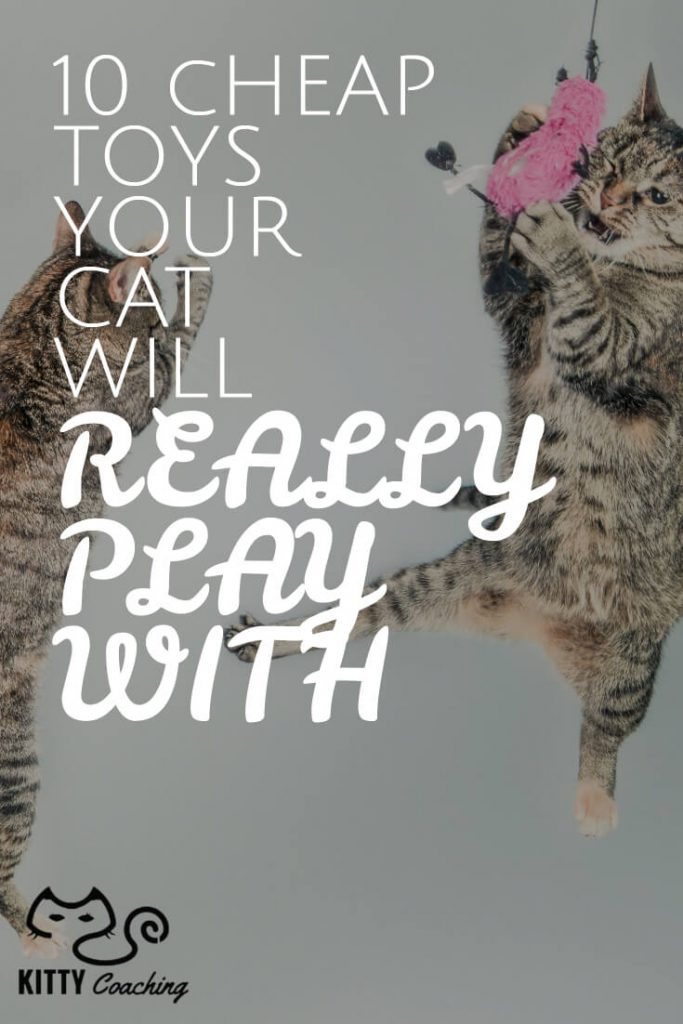 As any cat owner knows, cats will entertain themselves with almost anything. Boxes, rugs, tablecloths, drapes, bottletops, spiders, frogs, iPads – even your hands and feet are not safe. What they DON’T normally play with are the toys you buy them!

That’s why it doesn’t make sense to spend too much when shopping for kittytainment. So we’ve compiled this Top 10 list of inexpensive gizmos that cats actually like – your cat is sure to like 2 out of 3, and you won’t feel too bad if Mr. Fusspot doesn’t play with one of his 5-dollar birthday presents.

Oh, and while he’s having fun with these toys, your furniture, ornaments, and limbs will be less at risk!

Described as “an interactive cat toy designed to charm and not harm”, this tops the list because of its quiet simplicity. At first it seems like a glorified piece of string, but in fact there’s something about it that drives cats wild. My kittens go crazy at it – their eyes wide, their bottoms jiggling in anticipation.

“We used to spend so much money on cat toys it was absurd. This is the LAST one I will ever buy for a cat. I bought six for Christmas gifts for friends with feline friends, and they all agree – THIS IS THE #1 Cat Toy of the Millennium.”

The drawbacks? Some people think the material is too thin (cats don’t seem to agree!), while some crazy moggies seem to be drawn to eating it!

My advice to you: if you purchase this toy, only allow your cat to play with it under direct supervision.

Designed for flat, carpet-free surfaces (all the better for your cat to send careening over the tile, chasing after it like mad), this toy comes in colorful packs of four. What we do is put one in the bathtub and let Mr. Hunter and Miss Uberhunter go at it – once they flick it away it slides right back down creating a feedback loop. Lower maintenance than the #1 pick!

One of the reviews that encouraged me to try it out went like this:

“I have two cats which are a mother and her son. The mother goes crazy over these things and I can’t keep enough of them on hand. She plays with them for hours (carries them, bats them, chases them all over the house). All I have to do is show her one and she’s ready to play and it gives her a great aerobic workout.”

While another raver adds that the only caveats are:

Those people don’t understand what’s it’s like having a cat, though. Don’t listen to them!

Described as “three fun activities for three times the fun” this toy is brimming with entertaining activities for your feline companion to choose from, including:

This is a really great toy for cats of all inclinations, and it’s perfect for disabled cats since they can chase, hunt, and fight without having to move around too much. (Fix it in position with a nail or something so that it is stuck in place.)

It’s the most expensive toy in this list (based on recommended prices) but it’s one of the best value for money cat toys out there – they really get used a lot. Even after my little terrors ‘killed’ the spring mouse there’s still lots of fun to be had. (We never found the mouse’s body…)

“I have to tune out the sound of the ball being knocked around, but it beats being poked in the ribs every 10 seconds!”

This is simply a tunnel, and not a giant underground one that the Swiss love to build. So what’s special about it? Simply that if you bend it, your cat won’t be able to see what’s on the other side, and it will get curious and want to explore. It’s also made of a crinkly material that provokes other cats to come and investigate.

As you might guess, this is perfect if you have more than one cat – they will hunt and chase each other, and launch sneak attacks from the openings in the tunnel. Like all toys, cats will use it less and less over time, but this is one that never seems to totally go out of fashion.

This product comes in a pack of 10, and is touted as “bouncing, pouncing colorful springs sure to drive any feline crazy!”

Now, my cats had a wild time testing these out, but there are a few unhappy customers out there. Because they’re made of plastic, there’s a risk of a cat snapping a bit off and trying to eat it. Putting safety first, only choose this toy if you can keep an eye on your cat while they’re playing.

A circular track centered around a scratch pad, this toy is meant to spare your furniture and unnecessary feline encounters! When your cat attacks the ball, the ball will zoom round like it’s in a James Bond movie, and your cat’s paws will end up on the scratchpad, where it will do that cat-scratchy thing that is so cute until it’s happening to your new leather sofa.

If you think your cat is a serene, dignified creature, wait till it gets on this for the first time. Mine went bananas swatting the ball around and around and around, while flopping onto their backs and doing it all again.

How about some more of those online reviews?

“The best cat toy we’ve ever seen/ bought/ imagined/ been given so far in a combined some 70 years of experience with cat friendship. Buy it… if you’re a cat person AT ALL (and who isn’t?… don’t answer that!) then you won’t regret it! EVER!”

Drawbacks? A haughty minority of cats may not find it interesting enough to garner their precious feline attentions. Other issues get sorted out very quickly by the responsive customer service team.

A catnip-stuffed squirrel, raccoon, or frog will be one of your cat’s most trusted and valued companions, being toted around everywhere they go, if you find yourself purchasing this toy. The soft fabric and crinkling it emits only serve to make this your cat’s most treasured item.

It’s something like a comfort blanket or a pet’s pet. Note that it’s bigger than you might expect, though you only get one (the Amazon image shows 3 side-by-side which confounds some people). There you will find this feedback:

“My cat is OBSESSED with her raccoon kickaroo. She carries it around in her mouth all day and loves to play fetch with it. I frequently wake up with it on top of me in bed from her wanting to play fetch in the middle of the night.. She also rolls around with it and licks it a lot. She has not taken to any other toy to the extent that she loves this one. Just picking it up and crinkling it at her, she goes nuts.”

Just be careful if you have a dog in the house, because they love these toys too. There are some hilarious videos about dogs looking sadly at their owners until they get them back. Cute!

This toy stimulates your cat’s senses in a fun way. It’s another ball-in-toy system, but this time not a simple circle. Instead, the ball travels round a circuit as your cats slap at it, and the slightly more expensive version has a wave feature, so that the ball goes up and down to further antagonize the cat!

This new version (2.0) has wider tracks and there are more than 100 layouts that are possible. That will help you keep it interesting for the cat over a long period, and rearranging the track is as easy as using lego.

You can also buy a ball suitable for night-time play – it lights up and makes itself a juicy, fascinating target for your cats to hunt.

While not technically a toy, cats find this food-dispensing ball just as entertaining as other items on our list, and one genius put a bell inside and began using it as a toy, so its purposes are as varied as your imagination! The Slimcat is a small ball your cat can play with, and as play happens bits of food drop out.

Since the amounts that come out are so small, and since your cat will have to work for its meal, this toy helps prevent obesity.

And if your cat is the type to hoover up ALL the food going and vomit some of it back up – THIS is the solution.

Unless, that is, your cat is both smart AND lazy. That’s right, some clever kitties work out how to lie on their side and gently roll the SlimCat around while it dispenses treats. Another potential drawback is the size of the holes – they may or may not suit your cat’s favorite food/treats.

“This ball has done two wonderful things for our cat. First, she no longer throws up. She used to gobble down her food and then throw it up afterwards. Now she eats a little at a time, and it’s slow enough that she hasn’t thrown up once. Second, she’s lost some weight which she needed to do. She is friskier and also better with her paws. A great product.”

This wooden box looks like a cat version of Connect 4 and works by partially hiding what’s inside. Cats are unable to control their curiosity when it comes to cracks and crevices, and if they know something is just out of sight they get READY FOR ACTION!

It’s a well-made product and comes with a couple of toys, though you can use your imagination and throw some other things in there from time to time. Pro tip – use anything with squeaky noises to further provoke your cat.

If you’re not sure about this one, you can make a rudimentary version yourself with a cereal box – cut some holes in it and put a ball inside. If your cat is halfway interested, you’ll know this one is for you. Simples!