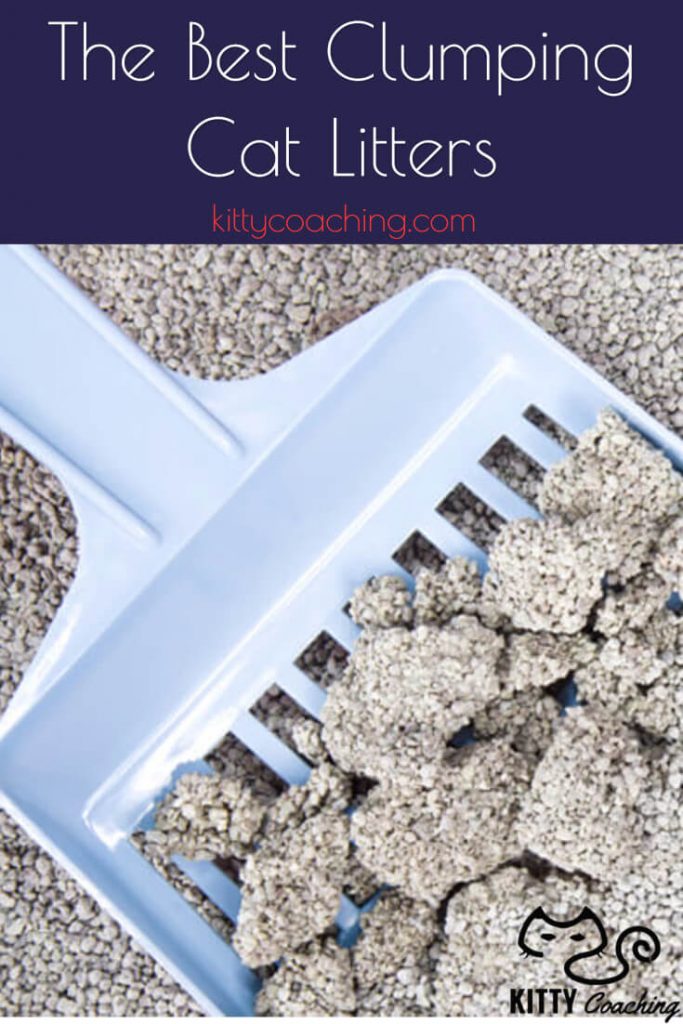 The rise in the popularity of cats as pets is, at least in part, down to the availability of litter boxes and kitty litter.

These mean that cats can live happily indoors, enabling those in apartments or who live near busy roads to enjoy the pleasures of feline company.

It also means that neighbors are unlikely to fall out over the somewhat anti-social (though entirely natural) habits of cats – toileting in yards that are not their own (usually the most lovingly tended, and expensively planted on the street!), and, of course, being veritable Angels of Death to the beautiful garden birds almost everybody loves to see and hear flitting and chitting about.

Hypoallergenic and completely natural and biodegradable, this kitty litter is designed to prevent tracking by small, furry paws! However, this does make it VERY heavy for humans to carry through to the litter box – especially if you’re buying the 40lb bag option.  If you struggle with upper body strength, or your litter pan is located upstairs, the best option may not be the most practical.

This kitty litter comes in large bags, and is reasonably priced. If you have the strength to carry it through your house, the 40lb box represents excellent value for money if you have a multicat household.

A dust free litter designed to stay fresh even when the same litter box is being used by several cats. This litter comes in a variety of package sizes, so you can pick the option that best suits your needs. The biggest plus point for this kitty litter is that the clumps are neither sticky nor crumbly, making it more appealing for cats, and easier to scoop for humans.

As long as your cat isn’t put off by the scent, this is another big-box, economy purchase litter that represents excellent value for multicat households.

This litter represents good value for money for multi-cat households, as it lasts well, without compromising on freshness.  It clumps instantly, although the clumps don’t cover urine particularly well.  While the litter itself is low-dust, it does tend to break down into a slightly dusty powder. Also, while the lavender scent is very appealing to humans, some cats are put off by it.

A good, economical option if you’re happy to clean trays more frequently in order to combat the issues around urine absorbancy.

This is a low dust litter with good odour control. Unfortuantely, it does tend to track readily on furry paws, leading to a lot of extra housework! It also doesn’t clump well on faeces, which, combined with the tracking issue, can be a hygiene problem.  It also has a strong scent which some people and pets will find unpleasant.

Pricey, considering the issues that have been identified. Not suitable for multicat households.

A low-dust litter that is gentle on little kitty paws.  This kitty litter is good at minimising odour, although it does have a strong smell which some people and cats may dislike.  It’s also not great at clumping on urine, and is expensive compared to other brands, which offer much larger packages, often at slightly lower cost.

It is best to avoid spending money on a litter that has been identified as not clumping well on urine. Cats are very fastidious creatures, with impeccable attitudes to hygiene.

In many cases, if a cat can smell or feel urine in their litter box, they will elect to toilet elsewhere – without regard to whether their humans consider their chosen spot hygienic!  If you do purchase a litter that doesn’t handle urine all that well, you will need to thoroughly clean the litter tray at least every other day, or daily if you have more than one cat.

Obviously, this is something of a chore, particularly for those with busy lifestyles, so checking what others have said about how a particular litter handles urine before buying is advisable.

Kitty litter was, in fact, invented entirely by accident. In the 1950s, Ed Lowe was manufacturing absorbent clay pellets to sell to factories, to help clear up grease and oil spills.  When a neighbor was recounting to him the difficulties of providing her cats with indoor toilets which she filled with earth and sand, Lowe jokingly suggested she try some of the clay pellets he made – after all, if they worked on factory grease, cat leavings should be no problem!

The neighbor was so thrilled with how much cleaner and simpler the clay pellets were to use that she told cat-owning friends, who also wanted to buy the pellets from Lowe.  Intrigued by the popularity, Lowe bagged up some of the substandard clay pellets, which couldn’t be sent on to his factory customers, and simply wrote “Kitty Litter” across the sacks.

He then contacted local farm, pet, and hardware supply stores, suggesting they sell the sacks for 65 cents a pound.  As this was significantly lower than the $1 a pound price of sand sold for cat trays, the store owners thought Lowe was crazy.

However, they changed their tune when they saw record sales of “Kitty Litter.”  In 1990,  Lowe sold his “Kitty Litter” company, which included the “Tidy Cat” brand, for $165 million – certainly not “cat scratchings,” by anyone’s reckoning!

Lowe’s cat litter was non-clumping; clumping cat litter, however, was also an accidental invention, courtesy of chemist Thomas Nelson, in 1984. Nelson was studying the molecular structure of clay, and the changes various compounds caused to it. Having added bentonite to clay pellets, Nelson accidentally knocked a beaker of water into the mixture: observing that the bentonite caused the clay pellets to “clump” around the main areas of the spill, he realized this could make cleaning cat boxes even easier for cat owners – and clumping cat litter was born.

What Are the Benefits of Clumping Cat Litter?

Clumping cat litter is much easier, and more efficient, than the non-clumping variety, as it enables the ‘clumps’ of faecal matter and urine to be scooped out daily, rather than a cat owner needing to throw out the entire tray of litter each time, as is required with non-clumping cat litter.  With daily scooping and topping up, a litter box filled with clumping cat litter, and used by one cat, will only need a full change once a week.  This is easier for cat owners, and means a bag of cat litter will last longer, making it more affordable in the long term.

Can I Use Clumping Litter with My Kitten?

If you’re using a litter box for a young kitten, it may be best to avoid clumping cat litter, and litters made from silicone gels, as kittens explore the world, much like human babies, by putting the parts of it they encounter in their mouths.  While bentonite, the compound that facilitates the clumping action of clumping kitty litter, is benign, kittens can choke on the larger particles of clumping litter.

Also, it is considered a good idea to thoroughly clean a kitten’s litter box daily anyway, to avoid any aversion issues around ‘dirty’ litter.  Kittens, being new to everything, will have heightened sensitivity to the scent and feel of their litter box.  All cats are fastidious by nature, and dislike using a litter box they consider unhygienic; often, if a cat can smell urine in the box, it will toilet elsewhere.  Unfortunately for humans, this ‘elsewhere’ is often the carpet.

Avoid clumping cat litter with very small kittens. However, once they’re big enough that choking isn’t likely to be an issue, there should be no problem with reverting to using clumping kitty litter.

How Often Should You Clean A Litter Box, And Where’s The Best Place To Locate It In The House?

If you are using clumping litter, the litter box should have clumps of waste scooped out daily, and be fully changed, and thoroughly scrubbed down, weekly.  In multicat households, there should be one litter tray per cat, and at least one additional litter box. Litter boxes should not be too close together, and at least one should be in a more distant room, in case a cat should feel the need to get away from it all while they do their business.

Litter boxes should be placed in quiet yet accessible locations.  Cats are naturally cautious creatures, and like to be able to see all around, without risking anything walking into them while they’re getting on with things.  Corners of rooms without a lot of background noise are ideal.  Placing a litter box by a door is not, as the draft will cause many cats to feel unsettled.

Can You Flush Clumping Kitty Litter?

In general, clumping cat litter can’t be flushed down the toilet; because of the nature of the particles, it will either damage or clog your pipes.  Silicone based litter, especially, is also toxic to aquatic life, and should be kept out of the sewage system.

If you are on septic tank drainage, rather than mains, you should NEVER flush any kind of kitty litter, as septic drainage simply can’t handle it.  For those on mains drainage, connected to a city sewer system, some brands of clumping litter ARE designed to be flushed. (Example: [amazon link=”B00M3SC7D0″ title=”Better Way” /]) However, even with these brands, it is best to avoid flushing if your district’s sewer system empties into the ocean or other waterways.

Can You Make Clumping Cat Litter at Home?

While making fully clumping cat litter at home is tricky, you can make a biodegradable, eco-friendly litter that will need to be fully changed daily – home-made cat litter won’t have the odor-blocking properties of store-bought.

To make your own kitty litter, tear newspaper into thin strips, or run it through a domestic shredder. Soak the strips to remove the printing ink – which is toxic to animals, including cats – and then rinse under cold, running water.  Put the wet newspaper into dry tubs, and separate out the natural clumps that will form.  Knead until fine and crumbly, and allow to fully air dry before adding to a litter box.

How To Properly Introduce Your Cat To Its New Home

The Best Nail Clippers for Cats